Hiring a low-cost, undertrained Cherry Hill security provider means opening up yourself to risk and liability. When you hire a professional security team, you expect more than just a person in a guard's uniform. Your Cherry Hill security guards must be vigilant, reliable, expertly trained to solve problems, and equipped with the technology and tools required to do their job efficiently.

At Echelon Protection & Security, we offer you peace of mind by developing a flexible Cherry Hill security plan bases on your unique needs. We hire only the most highly trained and certified Cherry Hill security guards, all of whom are thoroughly vetted and trained to solve problems, confront challenges, and de-escalate potentially harmful situations.

We accomplish all of this at substantially less cost than a police officer, so contact us today for pricing information and expert guidance. We will help you develop a security solution utilizing the best Cherry Hill security guards working today.

A List of Our Comprehensive Cherry Hill Security Services

We are fully capable of providing a solution to every security issue you face. Our comprehensive list of security services for Cherry Hill clients include:


Contact us today to find out more about our certified Cherry Hill security guards. 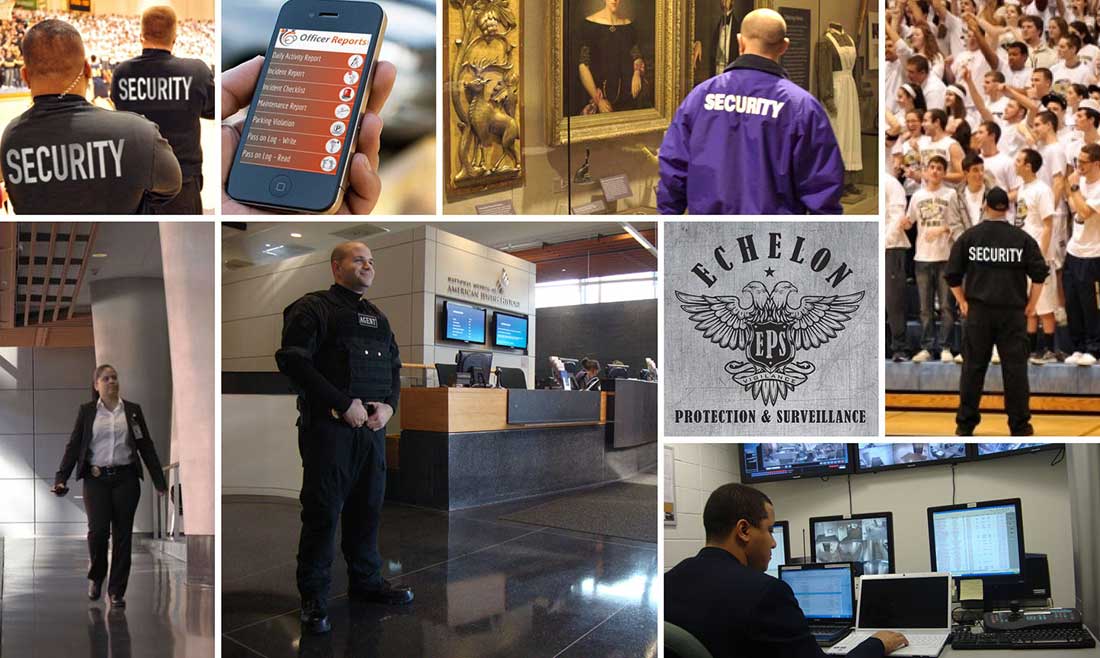 The English pioneers established the settlement of Waterford Township, in 1695, which was one of the original townships of old Gloucester County. The community had a successful, varied, and long existence as a mill community as well as an agricultural center. The residents of this settlement held a town meeting and incorporated the township under the name of Delaware Township in 1844. This township then became part of the newly organized Camden County.

In 1886, the description of Delaware Township was a prosperous agricultural community that was primarily comprised of carriage making shops and gristmills. Ellisburg was not only the name of a shopping center,

However, the community once served as the governmental and social center of the former Delaware Township. The name was in honor of the

A man named Isaac Elli built his tavern at the intersection of King's Highway and Moorestown Road. Soon afterwards, private homes and a

blacksmith shop were also constructed. Sometime later, the tavern was bought by a man named John Ilg, and the tavern became known as the Ellisburg Inn. Up until 1881, when the railroad between Medford and Philadelphia started operation, this Inn was a popular stagecoach stop.

In the 1750's the first schoolhouse was built in the township, which was built on Mr. Ellis's land and was a log cabin. In 1821, another building known as the Ellisburg Waterford Townhouse and School, gatehousewas also completed in Ellisburg. Up until 1885, when the Town Hall was constructed on the adjoining property, the school hosted the town meetings for the community, much as the name suggests. These buildings were constructed on the land currently occupied by a McDonald's store on Route 70. In addition to the Ellisburg General Store, the Inn was demolished in 1938 for in order for the Ellisburg Circle to be built. In order to reduce the traffic congestion in the region, in 1992, this traffic circle was removed by the State.

During the late 1600's, on the southern branch of the Pennsauken Creek at the current intersection of Church Road and King's Highway, the settlement of Colestown was established. The namesake of the settlement was a man named Samuel Coles, who, in 1685, bought 1,000 acres there. During the 1800's, the settlement grew with the popularity of the Fountain Hotels Resort, but at the time only contained a cemetery, a church, several houses, a blacksmith shop, and two stores. Its primary attraction of the hotel was a mineral spring that was believed to have medicinal value. The only remnant of this settlement is the Colestown Cemetery. In 1975, the familiar stone gatehouse was listed on the National Register of Historic Places.

Cherry Hill grew in accordance as the vision of the American dream continuously widened. After the great depression, luxury and entertainment were the most popular concerns even as the US faced the prospect of entering another growing World War. The entrepreneurs in the area took critical gambles on the cheap property Delaware Township, and banked on its close proximity to both Gloucester City and Camden County as well as the longstanding population of South Jersey and especially Philadelphia. The sleepy agrarian area also proved exceptionally inviting for resort oriented ventures, such as entertainment.

On State Route 70, also known as Marlton Pike in the town house of Ellisburg, the first annual meeting of the residents was held in 1844. That building also served as the Ellisburg School. The Colestown Cemetery gatehouse still remains at the intersection of Church Road and King's Highway.

Starting in 1901, this area started holding Town Meetings on a monthly basis. These meetings became bimonthly in 1924. A considerably amount of the produce grown in Cherry Hill was grown for the Campbell's Soup Company, which is currently located in Camden Throughout the early years of the 1900's, and especially after WW I, the area that bordered Philadelphia suburbs started to expand, which blurred the lines between its neighbors and the Delaware Township.

Many superb homes made from brick along with generously proportioned lots lined streets named for elite suburbs on the legendary Main Line of Philadelphia.

There was unprecedented economic and population growth following WW II. The demand for housing skyrocketed while the country was welcoming its victorious servicemen. Developers started resorting to local rural locations, such as Delaware Township, which seemed to be especially an appealing location as the result of its recent reputation as a playground for the middle, as well as the upper class. There were numerous homes developed from empty fields of Downs Farms, Brookfield, and Kingston Estates. In 1977, the Garden State Park racetrack's original grandstand burned to the ground, but in 1985 was rebuilt. In 2001, the final race was run.

In 1961 the recently quadrupled local population elected by to officially change the name of the community Cherry Hill. The township of Cherry Hill continued to grow, with its new trend setting Mall and a new title to match its new image. Throughout the late 1970and the early 1980's, the Latin Casino Restaurant and Theater had a brilliant future in the growth of the population of Cherry Hill. By 1985, the population of Cherry hill reached approximately 70,000 people with synagogues, Churches, schools, High rise apartment buildings, industrial and commercial centers, and restaurants grew with the burgeoning population. Attention then shifted to the process of supporting fine arts and cultural programs, managing regional traffic, expanding educational opportunities, and enhancing the Township park system.

These days, Cherry Hill is exactly what it ,has been for over 160 years, That is a prosperous, growing community of diverse people who are looking for a safe and secure environment in which to raise a family as well as economic opportunity.