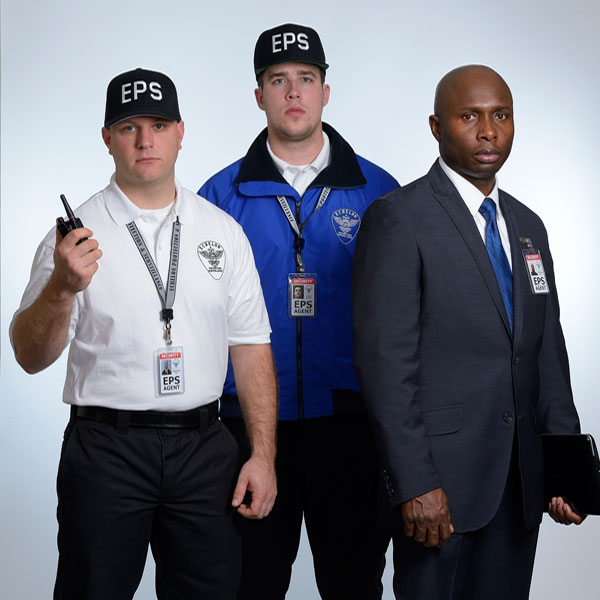 Hiring a low-cost, undertrained Philadelphia security provider means opening up yourself to risk and liability. When you hire a professional security team, you expect more than just a person in a guard's uniform. Your Philadelphia security guards must be vigilant, reliable, expertly trained to solve problems, and equipped with the technology and tools required to do their job efficiently.

At Echelon Protection & Security, we offer you peace of mind by developing a flexible Philadelphia security plan bases on your unique needs. We hire only the most highly trained and certified Philadelphia security guards, all of whom are thoroughly vetted and trained to solve problems, confront challenges, and de-escalate potentially harmful situations.

We accomplish all of this at substantially less cost than a police officer, so contact us today for pricing information and expert guidance. We will help you develop a security solution utilizing the best Philadelphia security guards working today.

We are fully capable of providing a solution to every security issue you face. Our comprehensive list of security services for Philadelphia clients include:


Contact us today to find out more about our certified Philadelphia security guards.

As laid out by the founder, William Penn, the settlement Philadelphia, was comprised of only that portion of the current community located between Vine and South Streets and the Schuylkill and Delaware Rivers. However, the fact is that the city proper was that portion between Dock Creek and Market (High) Street. This is where the early settlers built shelters on the higher land or dug caves in the banks of the Delaware River. In the meantime, the women were just as busy lighting a fire on the bare earth, and having traveling from one place to another with a kettle slung between two poles upon a transverse pole. This was all part of the preparation of the frugal and homely meal for the hardworking builders.

The native Indians were present, more or less, either as vendors of their venison, or other game, from the neighboring wilderness or as spectators of the improvements that were progressing. The earliest settlers were the Dutch and the Swedes, who, as a matter of course, provided their goods to the marketplace.

However, there were other settlements outside of these boundaries, and eventually they had separate governments and were separately incorporated, that made a conglomeration of communities and districts. The entirety of these early settlements were known as Philadelphia. Many of these settlements were located on the fringe of the city proper, and consisted of the West Philadelphia district in the west, Penn and Spring Garden districts in the north, the northern Liberty of Kensington, and Moyamensing and Southwark to the south.

In addition to these settlements, there were many other outlying settlements, villages, and townships close to the fledgling community of Philadelphia, although somewhat detached from it. Some of the more obvious settlements included the unincorporated Penn township of Passyunk, Kingsessing, Blockley, Mantua, Hamilton Village, Francisville, as well as Roxborough, the falls of Schuylkill, Germantown, Fox Chase, Rising Sun, Nicetown, Port Richmond, Holmesburg, Harrowgate, Frankford, and Bridesburg. Some of these locations also became a part of the extended streets of the conglomeration of settlements that Philadelphia is comprised of. However, in 1854, these settlements were all consolidated under one municipal government, and their boundaries are consistent with those of the old Philadelphia County.

Immediately on the waterfront, the settlement of Southwark was known for its large wood yards that supplied fuel prior to the days of anthracite coal, as well as the yards and sheds of mast makers and boat builders, in addition to the site of the US Navy Yard.

Many of the dwellings in Southwark were inhabited by seafaring men and sea captains and up until somewhat recently were inhabited by the families of seagoing people, known as watermen. The shipyards, mast makers, and wood yards have all relocated to other locations, and their old locations are currently occupied by the depots and wharves of the Red and the American Star lines of ocean steamships, the large shipping piers, elevators, and grain warehouses of the Pennsylvania Railroad Company, and extensive sugar refineries and commercial warehouses as well as the depots and wharves of the molasses and sugar for the West Indies trade.

Also having extensive lumber yards, and large cord wood yards and wharves next to the riverfront was the Northern Liberties. Nearly all of these activities have relocated and been replaced with shipping wharves, depots, railroad landings, commercial warehouses, and large markets for farm produce. However, a few of the lumber yards remain. This district was also characterized, especially next to Second Street, by its farmers' market that sold wholesale farm products of adjoining counties, such as vegetables, meats, poultry, eggs, and butter. Still remaining are some of the fine old produce yards and market taverns, although their marked characteristics have become obscured by the expansion of Philadelphia. Third Street was the location of large wholesalers of leather, groceries, and other provisions and Second Street was famous for its fine retail shops long before the Northern Liberties were consolidated into one community. Currently, almost the entire length of Second Street is lined with a double row of retail stores, not only in the old Northern Liberties, but for miles above and below. Cohocksink Creek and Pegg's, both of which flowed through the Northern Liberties, were the locations of many different tan yards. Close to the line of the northern Liberties was the Old Globe Mill, which was one of the great industries and pioneering mills in Philadelphia. The Northern Liberties embraced what are currently known as the 16th, 12th, and 11th wards of the community.

Kensington was a boat and ship building district, and another large part of its old time inhabitants were fishermen who supplied the, markets in Philadelphia. However, it wasn't long before Kensington began building steam machinery and manufacturing steel and iron. The result of these efforts can currently be seen in the large works in operation there and on the riverfront above. Kensington is part of the current 18th, 17th, and 16th wards.

The district of Spring Garden is currently characterized by many different types of manufacturing establishments, including Powers and Weightman's chemical laboratory and the great Baldwin Locomotive Works, had many different beautiful houses and was the primary location of the Honorable and Ancient Fraternity of Butchers, also known as Victuallers, and was one of the most pleasant suburbs in Philadelphia.

Occupying the Delaware River front to the northeast and north of Old Kensington, is Port Richmond. This district was made somewhat famous by its extensive coal traffic by sea with the establishment of the tidewater terminus of the Reading Railroad Company. Almost immediately, this effort started improving the unproductive land in the area, with offices, workshops, engine houses, coal depots, and shipping piers. These were rapidly followed by a massive increase construction of buildings as well as the population, rapid progress and great activity in all respects. The coal trade was the first to be built up, although the district is currently the center of a manufacturing trade that is one of the best in the U.S.

The other villages and districts have been incorporated in Philadelphia and are now part of this great community.