Rethinking Physical Security In The Age Of Terrorism 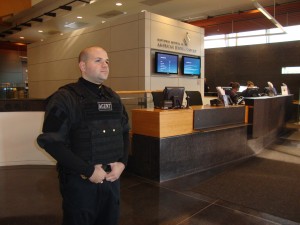 As terrorist attacks become more frequent and more deadly, the threat of terrorism is becoming a much larger concern. For better protection, we will need to look at how the world is changing, what it is leading us to, and the steps that can be taken today for better security.

It may seem like the stakes are still the same for security, but the landscape has changed immensely. There are more considerations needed for terrorist threats. It is no longer only heavily trafficked areas may have needed security guards. Now, everyone needs active physical security.

The use of explosives and the apparent randomness of the attacks make a potential target far less obvious. In the case of the shooting in San Bernardino, the target was a building, which serviced individuals with developmental disabilities.

Every business, property manager, and individual need to consider the possibility of a terrorist attack. It is not just a consideration for events or areas with lots of foot traffic. A lack of security creates a terrorist opportunity. If you are not prepared, then you are a potential target.

Of course, special events are more likely to be a target, as was the case for San Bernardino. But even venues like bars and concerts have been targeted, as was the case in Orlando and some of the recent attacks in France.

The Mindset Of The Future

What will have to change is the anticipation of a terrorist attack. Every industry will have to be preemptive with their planning. Terrorism will need to be treated like preparing for a natural disaster. Not something inevitable, but something that is as disruptive as it is unexpected.

Your particular type of business is only safe from terror attacks until the moment it isn’t. By placing experienced security guards in every building, the risk of attack will drop dramatically.

Security for every industry will need to have terrorism response training. And more buildings will need to staff security personnel. The importance of trained onsite first responders cannot be overstated, as emergency response will be minutes away in the best-case scenarios.

Where The Fear Leads

With the use of explosives and automatic firearms, minutes of unchecked terrorism can be devastating. So the mindset will also shift more to focus on anticipation and profiling. Threats will need to be discovered before perpetrators take action. This does not necessarily mean racial or ethnic profiling, as much as it has to do with the body language and attitude of suspects.

These preparations are likely to become the general mindset of the security world only due to their effectiveness. Similar precautions are taken in Israeli airports, leading to perfect security records. A mindset of fear, unfortunately, leads to a default position of mistrust. If terrorism continues to go unchecked, the intensity of security precautions will become more preemptive.

What You Can Do Today

The first step is realizing that you are not immune to a terrorist attack simply because of your type of business or industry.

You will need to be vigilant, and invest in better security. This can be passive security measure, such as installing new locks, strengthening windows, and using stronger doors. For more active security, you can also use highly trained security personnel.

Employees can also be trained to deal with these situations more effectively. Everything from evacuation plans to education on the warning signs of terrorist intent will help.

Any of these security strategies will also help to prevent theft, burglary, and even make your business safer in the result of a natural disaster.  Everything you do today will benefit your overall security.