The POTUS’ Infrastructure Bill: What It Means for Construction 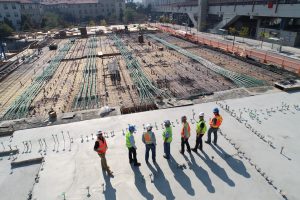 The POTUS’ infrastructure bill is a huge win for the construction industry. This bill will invest billions of dollars into repairing and building new infrastructure projects across the country. This is great news for construction workers, who have been struggling to find jobs in recent years. The passage of this bill means that many new construction projects will be created, which will provide much-needed jobs for American workers.

What is the infrastructure bill?

The POTUS’ infrastructure bill is a bill that was recently passed by Congress. This bill will invest one trillion dollars into repairing and building new infrastructure projects across the country. This includes things like roads, bridges, tunnels, and other transportation infrastructure. The goal of this bill is to improve the nation’s infrastructure and create jobs.

The bill is huge. Of the $1.2 trillion bill, there is an estimated $550 billion devoted to new spending above baseline levels. Every part of the infrastructure is set to benefit, including transportation, energy, and even broadband. That being said, most of the spending will be focused on transportation.

What is the current state of the construction industry?

The bill has had an immediate impact. The Government has said that there are already 4,300 construction projects underway with more than $110 billion in funding. What’s more, President Biden and members of his administration have made more than 125 trips to highlight infrastructure investments.

White House senior adviser Mitch Landrieu, says these projects are laying “a foundation for tremendous growth into the future.” “I think that if Americans step back, we will all have to admit that for the last 50 years we’ve had the need to do this and we haven’t found the will or the way to get it done,” Landrieu said.

What construction projects are underway?

As construction projects increase, so does the need for security. Construction sites are often targeted by thieves looking to steal valuable materials or equipment. This can be a major problem for construction companies, as it can lead to delays and cost increases. A good security system and team of security guards can help to deter thieves and protect your construction site.