Drive Safely During the Holidays: Put Away That Smart Phone! 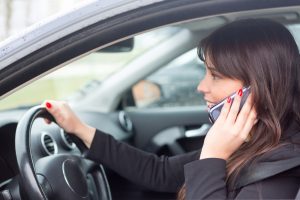 The traffic light up ahead turns red, you slow down as you pull into the left lane and come to a stop next to a car in the right lane with a young lady at the wheel. Chances are good that you will look to your right and the driver will be looking at her phone. Not the light. Not the pedestrians debating whether or not to cross. Not the cars and trucks all around the busy intersection. She’s completely absorbed in her device.

We’ve all seen it. Perhaps we’ve even done it ourselves. Texting, emailing, making phone calls aka “distracted driving.” It’s a growing problem and it gets even worse during the holidays.

While this subject may be a little outside of our usual range of topics, I have been a Volunteer Firefighter, and more recently a Fire Police Officer, at the Fort Washington Fire Company for over 40 years, so everyone here at Echelon is committed to doing our part to facilitate a safer world. And distracted driving is far from safe. With the holiday season in full swing, the possibilities for distractions while driving increase, so the last thing anyone should do is add the extra layer of distraction by texting or using social media while driving. Even without this relatively new safety issue, the driving fatality statistics during the holidays are alarming.

According to the American Safety Council, the top 6 most dangerous holidays to be on the road are as follows1:

We are right in the thick of that list with a cluster of holidays, Thanksgiving, New Year’s Day and Christmas, occupying the number 2, 3 and 4 slots. And this year, with both Christmas Eve and New Year’s Eves both falling on a weekend day, we can expect a higher number of fatalities than usual.

But that has been pretty much the standard for many years, and many of the accidents that contribute to the above rankings are caused by drunk drivers. But now, if we add cell phones to that mix, we start to see some truly alarming statistics.

The National Safety Council (NSC) tell us that fatalities on U.S. roads rose by 14 percent since 2015. This is the largest two-year increase in five decades and attributed to cell phone use while driving. A recent study from Cambridge Mobile Telematics revealed these key findings2:

Tragically, the NSC also tells us that every day in the United States, 11 teens die as a result of texting while driving. That’s a sobering thought, and it is disheartening to know that during this holiday season, dozens of families will be suffering the loss of a teenage family member simply because someone could not wait a few minutes to send or respond to a text.

Laws banning phone use during driving are only marginally effective, but oddly enough, the object at the very center of such tragedies, the smart phone, may actually be part of the solution. Abundant apps are appearing that will disable phone usage during driving, and parents and teens alike are adopting these safety measures. Other apps can be used that analyze driving behavior, and some even employ gamification to engage young drivers in improving their skills.

Let’s face it; as a teen today, it is very difficult to resist the perceived need to respond instantly to a text or social media post. When it comes to our weak spots, we all could use some help, so if the smartphone itself can be employed to solve a problem it has inadvertently caused, then there is hope on the horizon.

In the meantime, stay alert, put down the cell phone and drive happily and safely through this holiday season.

1The American Safety Council, The Six Most Dangerous Days to be on the Road, (Nov. 19th 2017), http://blog.americansafetycouncil.com/six-most-dangerous-holidays-to-be-on-the-road-2/