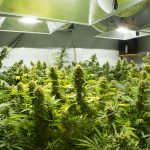 Sales of legal cannabis are growing at an annual rate of 17 percent and are expected to reach $13.3 billion in 2020, according to a report by New Frontier Data1. Clearly, we have a growing industry (pun intended) and the participants are developing systems and operational standards as they go. For obvious reasons, one of the areas that requires some quick learning is in the area of security.

A quick search on Indeed.com for jobs with the keywords “Cannabis Security” returned 129 results. A general search on the category returned 871 jobs. No doubt, this is becoming big business and of course, there is a lot of money involved. But there are plenty of issues as well. Marijuana is still a controlled substance in much of the country, and the main players in this space used to be organized crime and drug dealers. Transporting the product is akin to transporting gold; it is very valuable and untraceable if stolen.

Insurance companies and risk advisors typically rate cannabis operations in the “high risk” category, comparable to liquor stores and pawn shops. Most banks will not work with these companies, and some large security businesses like ADT refuse to service this industry, largely out of fear of losing government contracts, since pot is still illegal as far as the federal government is concerned. As of November, 2017, there are 29 states (plus D.C.) that have legalized marijuana2.

Security companies in states where pot is legal are already scrambling to position themselves as leading providers. Offerings will typically include armed and unarmed security guards, armored vehicles for transporting goods and cash, and security and surveillance systems for both growing facilities and dispensaries. The products are pretty much the same as they are in other industries: security cameras, integrated systems, employee management and screening, on-premises guards and the like.

At the moment, the largest market for legal cannabis is in Los Angeles, California. Until quite recently, neither the state nor the city of L.A. had instituted regulations concerning how the cannabis entrepreneurs managed security, but that is soon to change after the public voted to pass Measure M, a fairly comprehensive measure to create not only security protocols, but industry wide regulations.

Pennsylvania legalized medical marijuana sales and usage in 2016 requires dispensaries to maintain round the clock video surveillance, and data must be stored for a minimum of four years. That’s a costly proposition to be sure, and some companies are reporting security costs into the hundreds of thousands of dollars. Cheaper alternatives and workarounds probably exist, but vulnerability is of course a major concern.

Tony Gallo, CEO of Dallas-based Sapphire Risk Advisory Group, currently works with cannabis companies and notes that 60% to 70% of theft at marijuana dispensaries is committed by employees. Mr. Gallo suggests that employee vetting and creating work cultures that reward honesty can go a long way to keeping security costs down3.

In any case, the legal cannabis industry and market will continue to grow, and since security is a crucial element, a subsector of the security industry will no doubt emerge to meet the growing need. It is likely that large companies who want to do business nationally or with the federal government will stay away, and smaller companies will be hard pressed to obtain financing sufficient to address the needs of the market (armored vehicles, for example), so it looks like this may be a golden opportunity for the mid-sized security companies.