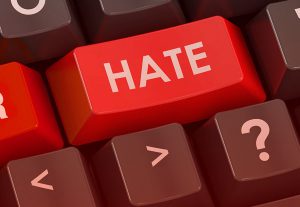 Technology has inadvertently connected us all to a nonstop stream of customized news and social media, creating a tsunami of easily shared misinformation and propaganda in the form of videos, posts, memes and tweets. Recent data shows that Facebook and YouTube struggle to monitor and remove the recruiting efforts of online domestic extremists and foreign terrorists. Add a perpetual “us versus them” narrative to a lot of the media we consume, and you have a recipe for anxiety and fertile ground for the seeds of hate. Just add water.

It’s no wonder that my company receives hundreds of calls each year from religious, scientific, research, or educational nonprofit organizations requesting solutions to their growing security concerns. According to the Hate Crime Statistics Act passed by Congress in 1990, hate crimes are characterized as “crimes that show evidence of intolerance based on religion, disability, sexual orientation, race, gender, or ethnicity.” Hate crimes are committed against people, property or society, and can involve violent attacks, theft, arson and vandalism. The most recent data available from the FBI reported 7,175 occurrences of hate crimes in 2017 which is a 17% increase from the prior year, and an uptick for the last three years. According to the Southern Poverty Law Center, the number of hate groups in the U.S. is the highest in 20 years.

As if that wasn’t enough to keep us all up at night, consider that shootings are a daily occurrence in the United States, https://www.gunviolencearchive.org/reports/mass-shooting. It stands to reason that the more a nonprofit matches a specific hate category – the more of a target they become for planned, politically inspired violence by domestic extremists and foreign terrorists. We tend to think of hate groups as neo-Nazis, white supremacists, black nationalists or neo-Confederates, but there’s no shortage of narrow-minded groups who blame “the other” instead of looking deeply at the root cause of their own suffering.

As a result, nonprofit stakeholders are looking for new and creative ways to protect their people and property while creating a welcoming environment where people aren’t scared to attend an educational program, cultural event or place of worship. The challenge is that non-profits often don’t have the budget they need to implement a meaningful security strategy. Below, I present 7 tested and proven ideas to raise funds and enhance security for your nonprofit.

Understand that these radical extremists are looking for an easy target where they can do the most damage and get the maximum media attention. So, when they see any type of visual deterrent, like a uniformed security guard on patrol or an access control system that may slow them down – they’ll think twice and often move on to a softer target. Although the state of our union shows reason for legitimate concern, the threat level of your nonprofit can be lessened by taking action. We suggest a skilled vulnerability assessment, timely implementation of the most efficient security solutions, trained security officers, and staff training that cultivates vigilant situational awareness.