Tell Your Loved Ones to Run, Hide, Fight 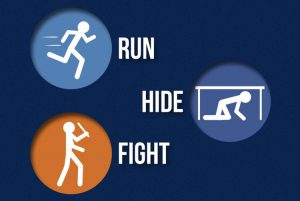 As of early August 2019, there have been 255 mass shootings in the U.S. It’s hard not to become numb to the violence or the fact that we’re no longer completely safe at our schools, malls, concerts, churches or place of employment. If we’re not mindful, it’s easy to become overwhelmed by the hate and violence that causes our fear and anxiety. Although the chances that you will be a victim of a mass shooting are low, the more prepared you are, the better your chances of survival in a worst case scenario. Although, there will never be a “one size fits all” rule for active shooters, I tell my loved ones to “run, hide, fight” because it’s easy to teach, remember and understand.

RUN away from the shooter

If you become aware of a shooter or hear gunfire, your best chance of survival is to try to escape. Whether you’re in familiar surroundings or a new location, take a few minutes to note the nearest exits. When possible, take the stairs instead of the elevators and remember that windows can also be used to escape. Students at Virginia Tech escaped the gunman in 2007 from a second-floor window. If you believe you could possibly be in the line of fire while you’re running, zigzag from cover to cover so you’re a harder target to hit.

Do not pull the fire alarm because it causes confusion and may send people out into open areas, where they could be easier targets. Instead, yell “gun” or “shooter” to inform people it’s not just a drill. Find out who the security director is at your school or work and ask them about active shooter drills, lockdowns and evacuations.

HIDE, if you can’t escape

If you cannot escape, attempt to hide anywhere there is a door. Lock or barricade the door to help deter access. Consider that office walls are often made of thin drywall, so if you can hide in a room that has an outside wall or no windows, you’ll be safer. If there’s no time to find a room with a door, hide under your desk. Your goal is to remove yourself from the shooter’s line of sight.

Do not play dead, because shooters have been known to come back and fire into wounded people. However, a teacher at Sandy Hook remained still after being shot and then escaped when the shooter left the area. Also, a student at Virginia Tech was shot while trying to escape but kept running and survived. The most important thing is to get yourself away from the shooter!

Once you’ve found a hiding place, turn off lights and call 911 to explain what’s happening. Then, mute your phone and be as quiet as possible, but leave your cell phone on so the dispatcher can continue to hear what’s going on. Stay low, but do not laydown, because that would make it harder to attack the shooter if he finds your hiding place. Remember that social media could give away your hiding place or alert the shooter to the location of the police.

FIGHT as a last resort

Experts agree that confronting a shooter should be a last resort because most people do not have the proper training to have a good chance at stopping a gunman. Your only option is to find some type of object to use as a weapon against the shooter. Although a broom stick, coffee pot, baseball bat, scissors, hammer or chair may be the only weapons at hand, no level of force is inappropriate when it comes to saving lives.

It’s disheartening to think that although recent polls show at least 70% of Americans want common sense gun laws – less than 10% believe their representatives will do anything about it. In my view, when our representatives begin to remember that their job is to represent their constituents, instead of the big businesses who fund their campaigns, we’ll have a safer country. All we can do right now is educate ourselves on gun violence, stay vigilant and call our state representatives to lobby for faster change regarding gun control.